The Truth About Visualization

In the second installment of his epic data visualization trilogy, Alberto Cairo has delivered what all of us who work in the field (or aspire to) desperately needed – a shared conscience, based on integrity.

Truth is neither absolute, nor relative.
– Alberto Cairo

As he so eloquently states in Chapter 3, “Truth is neither absolute, nor relative.” Ouch. That sentence hits as hard as a sledgehammer for the visualizer or journalist who hasn’t applied the proper amount of rigor and duty to their craft as they should. Thank you Alberto for calling us out on our less than truthful (i.e. sloppy) work. And, for further demonstrating throughout the book how to approach the entire visualization process from initial thought to final execution.

The Truthful Art’s greatest gift to the reader is not teaching us how to visualize expertly (which it does), but rather giving us all a true North Star for how to think about our work, every day, every time. No matter how skilled or artful we may become as data visualizers, the truth takes no shortcuts or holidays. Alberto reminds us that neither should we, and lays out a framework for how to apply the critical thought and preparation required to communicate data clearly.

More personal than his previous book (and nothing like a college textbook), we are treated to his lighthearted stories that make key points, and also his famously pointed insights (as his students and Twitter followers know so well). Reading through The Truthful Art feels like you’ve been transported to one of Alberto’s extended lectures or a master class on how to convey information with piercing clarity that exudes trust.

Make no mistake, this book is an excellent tour of data science and visualization foundations and techniques, but for us practitioners, it will be recognized as the clarion call for truth and scientific rigor in our visualization work. People deserve no less.

Don’t buy this book to learn how to become a data visualizer.
Read this book to understand how the best ones think. 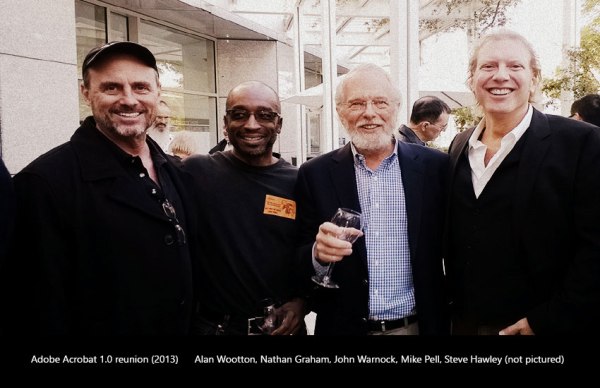 [ excerpt from “On The Carousel – the inside story of Adobe Acrobat” by M. Pell ]

The speed and apparent ease of our technological progress each day has in many ways numbed our ability to recognize and appreciate true innovations. Consumers and businesses alike have had their expectations set high by breakthrough products making the previously inconceivable commonplace. “Well, of course it should work like that – why wouldn’t it”. Indeed.

But, there was a time in the not too distant past when the common things we take for granted today seemed insurmountable – big dreams left to dreamers.

One of those dreams of the late 1980’s was quite simple, but profoundly difficult to imagine a solution for – the ability to transfer, view and print a document exactly the same between different computer systems and applications. Simple, right?

Today, it’s a ridiculous thing to even ponder. We can all exchange any type of media in exact fidelity to anyone, anywhere, anytime. But, this was still relatively early in the history of PC software, the age of incompatible operating systems and file formats. The World Wide Web was still years away from making its debut. People couldn’t even count on getting a simple Word document to look the same between a Mac and PC, never mind Unix.

John Warnock (then CEO of Adobe Systems in Mountain View, California) was one of those technically brilliant dreamers of the late 80’s who instinctively knew this common business problem could be solved by the right people and technology. After writing up the problem statement and proposed solution in an internal Adobe document called “The Camelot Project”, Warnock quietly gathered a small team to attack this Quixotesque problem. That original skunkworks project in 1990 quickly grew to become what we all know as Adobe Acrobat today.

This is the story of how Acrobat first started (and eventually changed the world).

When John Warnock wrote his visionary white paper “The Camelot Project” in early 1990, two things were very clear to him – first, there was a fundamental problem in worldwide business with being able to print documents to a wide range of printers but “no universal way to communicate and view this printed information electronically”. And second, he believed if this problem could be solved by Adobe “the fundamental way people work will change”. Clearly, this was a big opportunity in his mind.

The story goes John had been thinking about this concept for awhile, but finally came into focus after a visit from Jonathan Seybold or Steve Jobs (conflicting reports) where he asked if some kind of electronic newsletter could be built. Keep in mind, this is three years before the Internet and Web would be introduced to the mainstream through the Mosaic browser. We were still living in the land of floppy disks, boxed software products and even email was still in its early stages within business. So, this was a pretty radical notion to be able to “capture documents from any application, send electronic versions of these documents anywhere, and view and print these documents on any machines”.

Warnock also choose an unorthodox approach to getting a feel for what was possible in this problem space. Rather than pulling his best people or spinning up a major software project that could disrupt business as usual within the company, he choose the leader of newly acquired startup, Emerald City Software, to quietly get his team to put together a vision demo in just a few weeks.

Randy Adams was in many ways the prototypical Silicon Valley entrepreneur – brilliant, connected, driven, and possessing both business and technical chops. His small startup was acquired by Warnock and Adobe late in 1989 in part due of its ability to very quickly leverage Adobe’s ATM technology (Adobe Type Manager) as the engine for an innovative award-winning type manipulation utility TypeAlign. Integrating the talent from this small fast moving team into the much larger and growing Adobe could be very advantageous. And so it was.

In late May 1990, Warnock told Adams about his ideas for “Camelot” and asked him to do vision demo and a technical proof of how the PostScript (language for printing documents) and Display PostScript (technology for viewing documents onscreen) could potentially be utilized in solving the problem of universal document interchange. Adams turned immediately to a few of his trusted team members from Emerald City for help. At that time, his former team was still trying to find its collective way in fitting in to the Adobe corporate culture. They were seen as outsiders and not completely welcome yet.

In the first few days of June 1990, Randy Adams called a secret meeting with a few of his trusted engineers to disclose what Warnock had asked him to do. He needed to keep this project quiet and make it go as quickly as possible to keep it under the corporate radar as Warnock had asked. The assembled team was filled in on the mission and assigned to different parts of the problem with the goal of having a UI demo and technical proof ready in a few weeks. Ed Hall and Joe Holt would explore the new user interface concepts required to pull together a universal reading and printing experience in an easy-to-use application. Mike Pell and Bill Woodruff would do the technical proof of how the PostScript Interpreter could be used to convert printer output into documents that could be displayed onscreen quickly in a new interchange file format. Frank Boosman was asked to think about and write-up the overall product and business issues.

While everyone had their specialties for the project, there were many meetings of everyone involved brainstorming together to hash out the user interface ideas, technical approaches and demo plan. During one of those early daily meetings the topic of project codename came up (how could you write any code without a codename?). After a few names were offered up, Woodruff suggested “Carousel” as a playful name. The Camelot vision instantly became known as the Carousel project (and in fact kept that name for at least a year afterwards).

A skunkworks project like Carousel was a welcome relief from shock of working in a large corporate culture, so everyone threw themselves into it with startup determination. No one wanted to let Randy down in delivering a truly compelling vision of how this could work for Warnock. But, the team clearly needed help from some of the key Adobe engineers to assist with the technical proof. Mike Schuster had already been helping Pell tear the rasterizer out of Adobe Illustrator to create a separate code library (codenamed “SAL” or Smart Art Library) to be used by future applications. This work would turn out to be a key element of the Carousel demo. Ivor Durham helped Pell and Woodruff modify the PostScript Interpreter to convert output to a new interchange file format to be shown on-screen. Woodruff and Pell also worked with Richard Cohen to understand how to modify the existing Adobe Illustrator file format to accommodate multiple pages for the purpose of the technical demo.

During the few weeks the team had to come up with this compelling vision demo and technical proof, some of the key elements of what later became Adobe Acrobat emerged from brainstorming and individual explorations – small thumbnails of pages, fast full screen page views, multiple page sizes in the same document, conversion from any print stream to an file interchange format, intelligent zooming and panning, and cross platform UI concepts.

Finally, after several weeks of working on these hard problems, Randy’s team was ready for a meeting with Warnock to show him some demonstrable progress. Holt had done an amazing “smoke and mirrors” code mockup on the Mac of a universal viewing application complete with page thumbnails and fast page views (truly innovative for the time). Hall had coded a lean parser to read the new interchange format into a custom viewing app, to which Pell had hooked up the SAL rasterizer to display page content onscreen (proof the app could open and draw very fast). Woodruff had figured out how to construct a variant of the Adobe Illustrator native format to be used as an interchange file (the precursor to Portable Document Format, PDF). Boosman had gathered enough insight and knowledge from key Adobe people to form an initial product plan. The demo script was worked out and the team was ready for their date with destiny.

On Friday, June 29, 1990, John Warnock saw his dream of Camelot come to life in a small conference room in Mountain View, California.

On that day, Adams and his small band of corporate rebels demonstrated (a) the future user interface for viewing, printing and working with electronic documents, (b) how to modify the PostScript Interpreter to turn printer output into a new electronic document interchange file based on Adobe Illustrator format, and (c) a sample Mac application program that read in the new interchange format and drew it quickly on the screen.

His voice shaking, a heartfelt “We’re going to take over the world” was only thing Warnock could manage to say after seeing that first demo of what would eventually become Adobe Acrobat.

And that’s when I first saw that sly look on his face – a prospector’s glimmer in his eye and the beaming smile of man who just discovered a gold nugget in the dirt. Warnock just shook his head back and forth. He couldn’t believe it. Already an industry icon, John Warnock had accomplished more in the last few years than most do in a lifetime. But he had just seen his own vision for the future of computing and business come to life before his eyes. And in that glorious instant, a software giant’s destiny was set.