These examples of writing, creating, coding and laying out real book formats taught me a great deal about how important the design aspects of books impact the writing itself – it’s not something to be done at the end, but rather considered from the very beginning. Had a lot of fun doing these. Hope to write more in the near future. 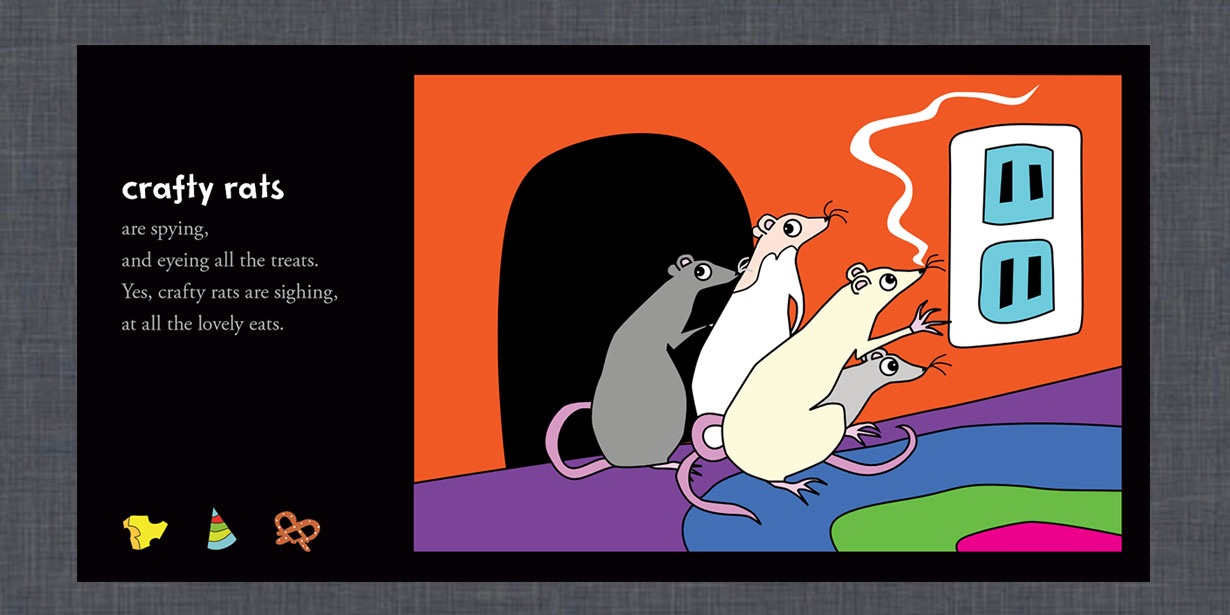 “The Crafties” by Sharon Melanie Pell

Available in the Apple iBookstore via iTunes

Description
Hey kids! Keep one eye on the carpet and the other on your refrigerator – a band of the cutest rats you’ll ever see are hungry! Read all about the adventures of Ratscallions, Mousy Peppercorns, Ratsy and Ratso as they try to outsmart their Princess and her green cat to sneak a bedtime snack. Hey Parents! You won’t want anyone to miss out on this modern day fairy tale for kids of all ages. The stunning illustrations make it the perfect iBook and a real treat for your eyes.

About the Author
New York City artist (and my sister) Sharon Melanie Pell was fascinated by Dr. Seuss and Walt Disney characters as a child, and began drawing prolifically at a very early age. The Crafties™ was Sharon’s first children’s book, based on her own adventures with her pet Ratscallions. Her artwork is a unique style of mixed media paintings, featuring captivating women and playful felines. Her work has been exhibited in galleries and boutiques around the world, including the showrooms and European storefronts of Tommy Hilfiger.

You can see more of Sharon’s artwork at www.pellmell.com

Excerpt:
“The speed and freedom of information in today’s world is intoxicating. We find ourselves constantly checking in with friends, coworkers and the world at large every spare moment – whether on the train, in an elevator or walking to lunch. Surprisingly, the real key to all of this is not the latest whizzy technology or sleek new device, but rather the most simple and basic communication tool we have as humans – text. So it follows that the way we choose to display our text as typography on a mobile screen greatly affects how we stay connected with the things that matter most to us. The focus of this book is to briefly discuss issues that face designers of the mobile screens we read and write with, and to look back at the brief history of this medium.”

Still vilified by some, but praised to no end by the publishing industry, Acrobat is arguably one of the most significant business achievements of the last twenty years. Why? Adobe not only correctly identified the need and nascent market for online document sharing in the early 1990’s, but continues to define and dominate that market to this day despite continued attempts by Microsoft and others to displace them. Until now, only a few insiders knew the real story of how Adobe’s visionary founder and CEO had to secretly unleash a band of entrepreneurial rebels to defy its own corporate rules to deliver a product that boxed out both Microsoft and Netscape, and ultimately changed global business.